There’s been a lot of controversy surrounding the sexual assault of Lara Croft in the new Tomb Raider game recently. If you don’t know, Squeenix released a trailer that showed a young, physically restrained Lara being set upon by a bandit who means to rape her. In the struggle, she shoots him – the first man she ever kills, according this character reboot. Then a producer for the game, Ron Rosenberg, said that as a result of her vulnerability you’ll want to “protect” the novice archaeologist.

In the gender politics maelstrom that ensued arguments flared up between fifty different camps about how stupid or annoying or evil or fascinating or pointless or fine or interesting or clichéd or disappointing it was that Lara had been turned into a tearful, traumatised wee girl for the sake of an “gritty” origin story – an origin story that simply supercedes the last one she had.  One camp said such a plot point was, at best, a tired old trope that paints women as vulnerable until they’re threatened with rape. Another camp said that they saw no problem with using rape or attempted rape in a videogames story, since every other medium does it and you shouldn’t try to limit or coerce the creative direction of the author’s tale in any case – at least not until you’ve seen the whole story. 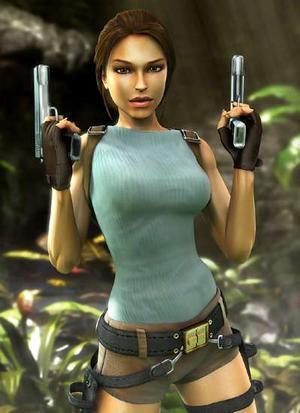 So the problem keeps shifting. Is it that Lara Croft has been portrayed as a weakling, where once she was strong? Or is it the insinuation that women need to have been threatened with rape before they can kick ass? Understandably, it’s probably both.

But everyone who has joined in this argument on either side has failed to consider one small thing. And that is: something a lot worse than attempted rape would need to happen to Lara Croft before she becomes the psychopath we all know her to be.

This is a woman who we first met traipsing around freezing caves in naught but a pair of short-shorts and a low-cut top. Who has killed hundreds, possibly thousands of men, in her quest for Old Lost Shit. Who thinks shooting one gun at a time is simply not killy enough. A woman who takes an UZI with her on a tourist trip to the Great Wall of China and who doesn’t think twice about filling up every endangered species she meets along the way with hot metal. This, Lara-lovers, is a woman who made the dinosaurs extinct for a second time. She is a bona fide, pathological maniac.

We’re not dealing with a mere borderline sociopath with a few mummy and daddy issues here. Lara suffers Caligulan levels of madness. Now, you could take the world of Tomb Raider for granted as an independent fictional realm of super-advanced ancient civilisations and relics of mystical power. Or you could, as I choose to, interpret the world of Tomb Raider as the ongoing depiction of Lara Croft’s perpetual mental collapse. A world in which she murders innocent government officials and has become the ultimate bane of the World Wildlife Federation.  Where she chases after “magical” artefacts and is beset by hellish visions of monsters and mutants and dragons and demons, all the while never coming to terms with the fact that they are her demons.

You think I’m joking but this is absolutely plausible. Let’s look at a few examples.

Two tigers protect their cubs against a terrifying poacher.

Such mania does not develop in a vacuum. Lara Croft is undeniably a psychopath but we should strive nevertheless to assess her character – not to forgive her actions but merely to understand her. So keeping all this in mind, it’s very clear what actually happened to Lara Croft when she was younger. The issues date back to her childhood, far beyond any coming of age story that takes place on a deserted island…

At the age of two Lara is strapped in a pram in the park with her childminder. A tame husky being walked approaches her pram and calmly takes her toy rattle from her. The dog trots away and she never sees her rattle again. This is Lara’s earliest memory.

At three, the young Croft’s childminder is feeding her dinosaur shapes made of processed turkey. But there has been a problem at the food processing plant and she is unwittingly feeding the child dinosaurs filled with sharp silicon residue. The childminder makes ‘rarr’ noises to make the food more appealing to the wailing child, not realising until later that Lara has suffered severe internal bleeding.

At age four, she is playing with a doll by the estate’s kennels when suddenly the hounds get loose. Arrested by a freak blood-rage, the animals savage the young girl. She tries to hit the animals with her limited edition Barbie Elegant Housewife but they chew it to pieces. She is saved by the dog handler but will undergo repeated facial and bodily reconstruction for the rest of her life as a result of the mauling, which will change her appearance every few years.

At age five, Lara is accidentally locked in the freezer room of her parent’s manor by the family’s butler, wearing only her pyjamas. She survives for five days on frozen hare meat. The specialised light bulb is constantly shining a bright turquoise and as a result the girl does not sleep once. Her mother sheds tears of relief when she is found, but Lara just stares at her.

At eight, her father takes Lara into his study and shows her a large antique globe. He explains in characteristically patriotic fashion that “the sun never set on the British Empire”. Then he turns. “One day, all of this will be yours,” he says, gesturing at the modest contents of the room. But Lara is still transfixed by the wooden globe. “All of it?” she says, eyes wide and breathing heavily through her latest nose. “Everything the light touches,” replies Lord Croft, anticipating the popular Disney movie, The Lion King. Unfortunately he is interrupted by a phone call before he can explain the Circle of Life to his only daughter and so Lara grows up with a colossal, global sense of entitlement – without any of the accompanying Mufasan wisdom. Lara stands by the globe and spins it continually for three hours, smiling.

At age 10 she suffers from an exotic and feverish virus her father has brought back from an international trip. Her new minder buys a box-set of adventure movies. An accident of technology leaves one scene from The Dark Crystal looping endlessly on the VCR, as Lara battles nightmarish visions of impossible creatures. She screams for her maid but no one comes.

At age 12, she gets separated from her family during a holiday outing in the North Yorkshire countryside. She is found two days later, grubby and tired but in good spirits. Local papers report three sheep have died in strange circumstances over the bank holiday weekend. The events are not seen as linked.

At 15 she is taken to a dance by an unintelligent but kind-hearted boy named Anthony Smeldwick. She tells her mother the next day that although she “thoroughly enjoyed herself” she won’t be seeing Master Smeldwick again because he is “too timid.” Meanwhile, Anthony’s father overhears the boy sobbing in the shower but disregards this as teenage angst.

At 16 Lara attends Gordonstoun boarding school in Scotland. She visits the school’s rifle range every day. Pupils at the time describe her as “quiet.”

You may have many objections to these biographical details and indeed they may contradict what Lara herself has previously told you. But then, even the most important details of her life have been very fluid over the years. Exactly who was on that plane crash in the Himalayas? First, we were told it was just her, then it was her and her mother. Once, she even insisted that her fiancé was on the passenger list. Every time we meet Lara, she has changed her story. And the origin tale of the upcoming Tomb Raider seeks to do this once more. Now there’s no plane crash at all, but a shipwreck. If we are lucky, Lara Croft is just an upper-class compulsive liar with a taste for hunting big game and an over-active imagination. But I fear we aren’t that lucky. This is the frightening reality of the woman who calls herself “the Tomb Raider”.

Filed under Failing to sell articles in spectacular fashion